Hi, this is Daniel Garber at the movies for culturalmining.com and CIUT 89.5 FM.

Edith is a young Toronto actor waiting for her big break. She even dumps her boyfriend so she can devote herself to her career. But ambition and moxie don’t translate into lead roles in hit movies. Despite her relentless auditions, she’s

Still in her early twenties, she’s turning bitter, friendless and alone. Only her bickering best friend Nick keeps her grounded. Is Edith’s heart in danger of turning to stone, with a tongue as sharp as diamonds?

Diamond Tongues is the name of a new film premiering at NXNE on June 21st. Co- 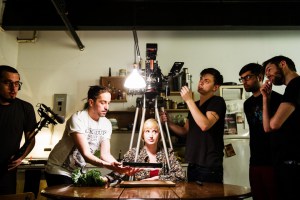 director/writer Pavan Moondi and star Nick Flanagan have created a quintessential Toronto indie film, a tightly-scripted comedy/drama about life as an actor on the hard…